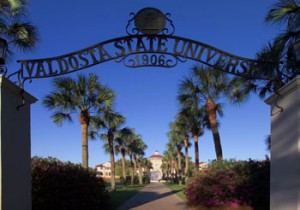 Every year, the VSU Public Administration Advisory Committee gives the award to someone in the community who provides excellent service to the public.

This year’s winner is the public information officer for the town of Valdosta, VA. There Mathews is responsible for the planning for the organization overall and the direction of the town’s information program.

Mathews got her MPA from VSU and is an adjunct professor at the university’s department of communications.

Mathews noted that she was very honored to earn the award, which was named after Loyce Turner, who was a highly dedicated public servant in the area. She also noted that she is very grateful to represent Valdosta, which has some of the best community leaders on the country, who have also received the award in the past. She said that those professionals have been the best example for her in her public service work. Mathews stressed that she really enjoys serving the leadership of the city and the citizens of the city as the Public Information Officer.

Also, a special presentation was given to Professor Nolan Argyle, who is going to retire this year. He is credited at VSU for developing its excellent MPA and Doctor of Public Administration programs.

Argyle, who is the coordinator for the public administration programs, noted that getting the DPA program going 6 years ago was the top highlight of his long career, as well as getting full NASPAA accreditation for the school’s MPA program.

The city manager for Valdosta gave the award to Argyle, and it said: Dr. Argyle, through his ability to teach, has helped to form the minds of many of our civic leaders today.

A professor of political science at the university said that Argyle truly designed and pioneered the DPA and MPA programs. He said that the professor was a great mentor to many MPA and DPA graduates, and he used the professional skills of those around him and he also did many important research projects that linked classical political philosophy to current MPA programs and problems in public administration.

Many of the MPA professor’s many colleagues and former students were at the ceremony to fully acknowledge his 30 years of service to the public administration programs at the school.

According to the university website, the Master of Public Administration program is set up to ready students for highly productive careers in public service. This program suits students who work in the public sector and also students who are looking for entry level positions in the field.

You need to finish 36 hours of course work, which includes 24 hours of core courses and 12 hours in a concentration. Note that the MPA, as well as the Public Policy and Public Sector Management concentrations are provided only by Internet. People who want to enter these concentrations have to be working in a government or nonprofit organization, and need to have at least two years of experience in the field.